Bio of a Lunatic Rancher 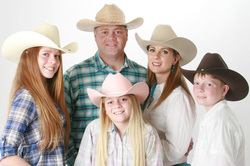 Douglas Lindamood, is a self confessed “CFLLR”, pronounced “Sif-ler”, or Christian, Fundamentalist, Libertarian, Lunatic, Rancher who practices, obscure and bizarre Ranching methods that, are oddly –enough great for the environment, the animals that live in it and the people who consume the harvest it produces.


“Running Chickens behind Cows, and Pigs on Fallow Ground is unheard of in my neck of the woods”, says Douglas, 37, of Carmel Valley Ca.


“My neighbors think I am Crazy, to be honest, I tend to agree with them – the stuff we do here on the Ranches is very unconventional… and extremely productive”


The SonRise Ranch cattle live on lush green grass most of their lives, receive no grain and are handled often enough to prevent an adrenalin rush each time they see a human.  This lack of adrenalin produces great tasting beef.  They don’t receive any hormones; antibiotics and don t eat any GMO commodity crops, during their entire 24 to 27 months.


“Once they are up to harvest weight, they are processed by a local, small-time butcher, who processes only a few animals per day. After all, what good would it do to spend all that time raising the best beef and ruin it in a “factory” slaughter house, where 1000+ animals are processed in a single day.  We take special care to age (dry) our beef for 14-28 days for a maximum flavor.”


The use of antibiotics within the modern cattle industry is extremely prevalent.  I know of very few producers that do not use antibiotics, at some stage of production and am convinced that not a single steer coming from a feed lot could ever be 100% antibiotic free.  In the movie King Corn, the narrator states that of over 70% of all antibiotics produced in the United States today are used in the Cattle Industry.  All those antibiotics are either absorbed into the muscle and then eaten by unknowing (willingly ignorant or not) consumers, or excreted out though the animals urine and absorbed into the ground water, creating a "lose-lose" situation for all players, animal included.

The vast majority of antibiotics are used in the feed lot, where a large number of steers are living in close confined quarters, on very poor feed (things they were never designed to eat).  These cattle will be a total loss to the feed lot if they perish, so keeping them alive until they are slaughtered is imperative. If they die before their slaughter date, they are often made into Jerky or Pet Feed, at a substantial loss.  By the way, don't ever read the back of a Jerky package, it will usually say something like "this animal was given a post-mortem inspection" - that's really not good. You see, one of the few things the USDA does do right is require that all food grade animals be given a pre-mortem inspection, which is an inspection while the animal is still alive by a federal inspector. It follows then that the inspection referred to on the back of that Jerky label is one that is conducted after the animal has expired.

A recent study by the "Arizona-based Translational Genomics Research Institute (TGRI) examined 136 meat samples from 26 grocery stores in Illinois, Florida, California, Arizona and Washington D.C" and found that conventional meats not only contained a large amount of bacteria, but that bacteria were surprisingly resistant to antibiotics. Why? The reason is that Feed Lot Steers have been doused with so much routine antibiotics that the meat (muscle) was naturally resistant to antibiotics that could kill bacteria and therefore far higher in bacteria level than non-conventional beef.

So, why don't we use antibiotics? Well, two reasons; we don't need to, and we don't want to... let me explain why.  First, we don't need to.  Cattle on fresh, new (rotational grazing) grass are naturally healthy.  Their rumens, (stomachs) function normally on the fuel that God designed them to run on - grass.  When a Bovine is fed grain, be it corn, beans, milled soy or anything processed, it increases the PH level inside it's rumen to the point where it can't function with 100% efficiency.  This endangers the immune system of the animal.  It would be one thing to feed grain or corn on the open range (we don't do that either), it's a whole different situation when you have thousands of cattle crammed in to tight quarters, all with weakened immune systems - the feed lot supervisors have little option but to pump their animals full of antibiotics. It's not in the natural diet for a bovine to eat any corn, so we don't feed it - as a result, our cattle are remarkably healthy and, yep, you guessed it - no need for medication.

Secondly, we don't want to - why, it would be a failure of our husbandry. No, were not talking cheating on my wife here, husbandry in the sense of good care of our animals. Our system is designed to keep our animals at top condition, gaining between 1 and 3 lbs of lean muscle mass (when they are less than a year old) and fat (when they are over a year old).  We watch for this and use it as a management tool to control pasture grazing and cycle rotation rate (how much fresh grass they get each day).  A sick Cow, Steer or Heifer is a sign of poor pasture management, not the animal crying for a shot of medicine.  If we have a sick beef, it is more often than not something in the diet (my job as a Grass Farmer) a lack of clean water, adequate shade or even hardware disease (when a beef eats a metallic object) - all indicative of improper grass management by the Rancher.  To feed antibiotics would simply cover up a greater problem, likely a very important one too.

So, there you have it.  Oh, and if I haven't made myself clear -we don't use any antibiotics, ever!